Hello, everyone! It’s the end of the month, which means I usually write a summary of my monthly reads, but this month, probably for the first time in years, I spent this whole month reading books I’ve already read. Which means there’s a good chance that a post centered around these books would be a repeat of a post I wrote a few years ago. That said, I also realized that even though I write individual reviews of movies I’ve seen, I’ve never done a monthly series in the same way that I do with the books I read, so I’m going to start a new series of posts and try to alternate them each month. So what did I stream this month? One universally detested romantic comedy, one quirky indie crime drama, a mediocre creature feature, and a cult-classic horror comedy. 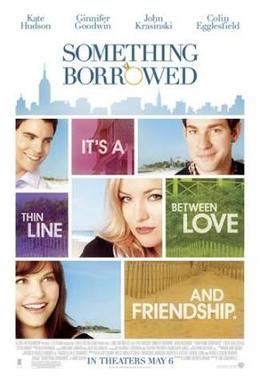 Quick Synopsis: Rachel has spent her whole life in the shadow of her glamorous best friend Darcy. But when Dex, Darcy’s fiancé, reveals his romantic feelings for Rachel, she decides to put her own desires first. As Dex and Rachel fall in love, they must decide how to navigate the turbulent waters of friendship and love, or risk losing each other forever.

My thoughts: Let me just preface my thoughts by saying that a lot of people hate this film. Like they abhor it. The reason for that is pretty clear, since the plot centers around the protagonist’s affair with her best friend’s fiancé, and neither character is ever punished for their moral transgressions. In fact, as in most romantic comedies, the romantic pair gets their happily ever after. While I, too, was bothered by the inherent grossness of the plot, and didn’t approve of Rachel and Dex’s choices, or the choice of the film to excuse and condone their actions with the cheap reveal that Darcy is also a cheater, I was still engrossed in the film because Rachel and Dex just have great chemistry. If you ignore the unethical nature of their relationship, it becomes just a cute film about two friends discovering their mutual love for each other. Unfortunately, I am not blind enough to be able to ignore the trainwreck that comprises the majority of the film, including the bizarre relationship between Rachel and her “best friend” Ethan, which mostly consists of them insulting each other, and in one startling instance, a scene where Rachel purposely smacks Ethan in the face with a badminton racquet. It’s a sickly-sweet movie with a nasty core, which explains the 2.5 star average on Letterboxd.

To watch or not to watch? This is a hard judgment to make. On the one hand, it’s a bad film that will probably make you feel icky for watching it. On the other hand, Colin Egglesfield is really sweet and cute. On the other other hand, he’s also plays a serial cheater. Since you have to make a pros and cons list before you even start watching, I’d say skip it.

Blow the Man Down – Bridget Savage Cole and Danielle Krudy 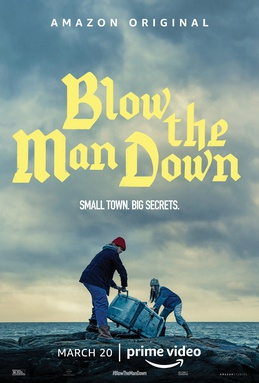 Quick Synopsis: When Mary Beth Connolly kills a local man during a violent confrontation, she and her sister Priscilla decide to cover up the incident in order to protect their shop and their reputations. But when Mary Beth takes a bag of money from the dead man’s apartment, they antagonize the owner of a local brothel, and uncover the seedy underworld hiding beneath the surface of their idyllic seaside town.

My thoughts: This film was a surprise. The debut of two women directors, which is still a rare gem in this day and age, Blow the Man Down reads like a quirky indie crime thriller along the lines of Fargo, but focuses on the fresh new perspective of two young women who are are trying their best to resist falling prey to the same forces that trapped their mother, and other women like her, in a system of violence and poverty. On the the aesthetic side, the film is beautifully shot, and the inclusion of a fisherman’s Greek chorus between acts adds a rustic folk element to an otherwise familiar plot. My main issue with the film is that it seems too short, and everything wraps up rather anticlimactically. But perhaps that’s the point.

To watch or not to watch: Definitely give it a whirl. The acting is top-notch, the music is gorgeous, and what better way to escape your dreary house than a 90 minute glimpse of the icy shores of Maine? 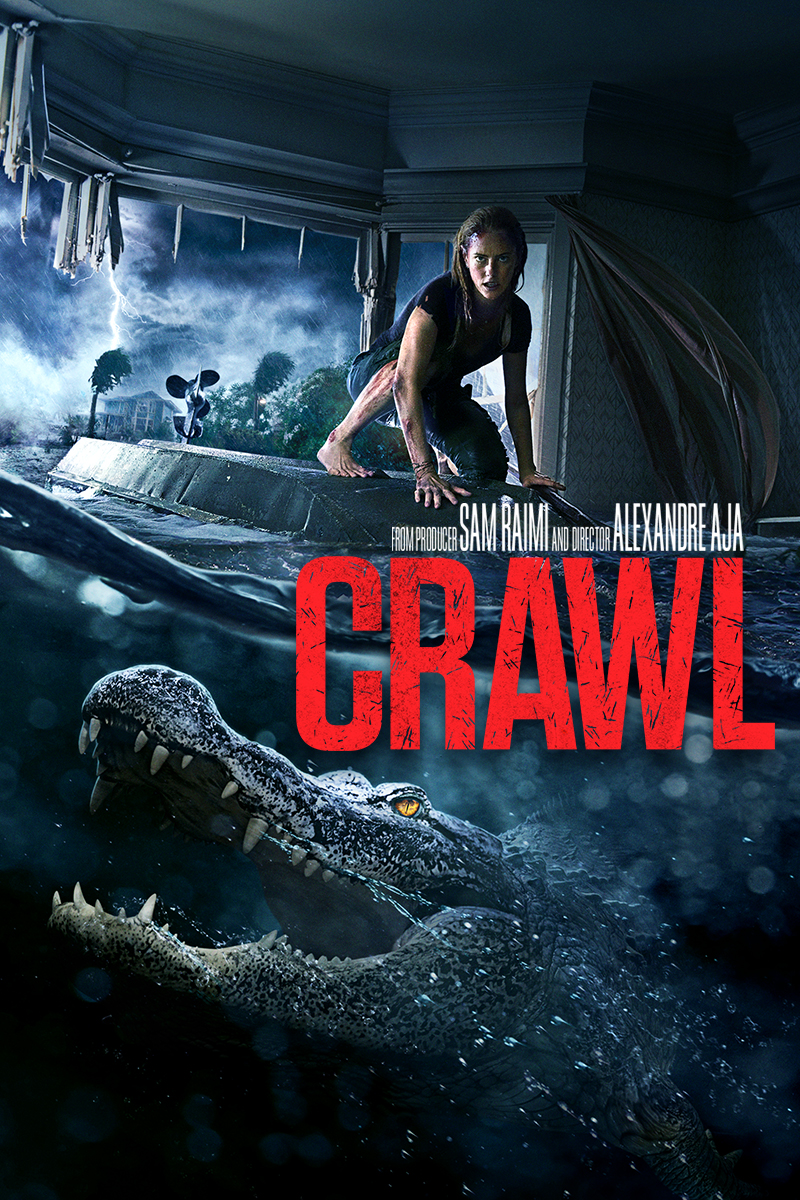 Quick Synopsis: As storm clouds swirl and warnings of an apocalyptic hurricane blare from emergency systems, champion swimmer Haley drives to her old beach house in hopes of finding her AWOL father. When she finds her father unconscious and injured in the basement, she realizes that she has more to fear than a hurricane. An alligator has found its way into their basement, and he’s not leaving without a meal. Trapped and desperate, Haley must save her father and escape the basement, before the alligator, or the rising water, kills them both.

My thoughts: I’ve mixed feelings on Alexandre Aja as a director, and Crawl perfectly summed up my ambiguity towards the guy. When it comes to his horror films, he goes all out with the terror and the gore. Sometimes it works, like in the terrifically terrifying The Hills Have Eyes, and sometime it fails, like in the incredibly bizarre Horns, but in Crawl he ruins his frightening premise by choosing the wrong kind of terrifying. I loved the inventive idea of trapping the protagonist in a house mid-hurricane, and I might have gone for the idea if Haley was trapped with a predatory animal like a Great White shark, but I remained unconvinced by the alligator’s predatory behavior. Like many animals with a bad rap, alligators are not evil eating machines, and as the alligator(s) chomped through person after person, I felt my suspension of disbelief wearing away. I’m pretty sure that if an alligator was in a Category 5 hurricane, eating would be the last thing on its mind. And since alligators are known to have small appetites even when they’re hungry, the idea of an alligator eating multiple humans in the span of a few hours defies belief. That said, the visuals were spectacular, and Aja’s knack for suspense remains as strong as ever.

To watch or not to watch? It’s a creature feature, which means it’s mostly an excuse to switch off your brain for 90 minutes. Even if it’s stupid, it’s still an enjoyable time. So yeah, watch it, but don’t expect to learn a thing about our dinosaur adjacent friends. 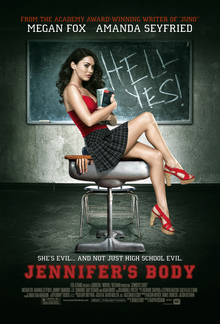 Quick Synopsis: High schoolers Needy and Jennifer have always seemed like an odd pair: Needy is the typical nerd, while Jennifer is her school’s definitive Queen Bee. But when Jennifer disappears with a rock band after a sudden club fire, and returns with a new appetite for human flesh, Needy realizes that her old friend has ceased to exist. With Jennifer on the prowl for boys, Needy must confront her best friend and put an end to her hunt, even if it means risking her own life.

My thoughts: I’ve been wanting to watch this movie for ages, and I really loved it. Panned on release, the dark horror-comedy has seen a cult-classic resurgence, with many loyal fans believing the film’s complex perspective on the darkness of female friendships was before its time. While the script is kind of clunky, and the characters could be better developed, the perfect 2009 aesthetic of the film, as well as its spin on the classic horror trope of the innocent damsel in distress, makes it worth the watch. Come for the memorable one-liners, stay for a new twist on a tale of teenage conflict  that makes Mean Girls look like The Sisterhood of the Traveling Pants.

To watch or not to watch: Watch it!

As Miranda Priestly woulds say, “that’s all.” I hope I’ve given you some inspiration of what to watch this month! Now get to it!