Hello, everyone! Today it’s raining hard enough to justify building another ark, but I’ve decided instead to write a review of the Netflix original movie Lost Girls. This film left me feeling depressed, frustrated, and unsatisfied, which all in all, is exactly what a film based on the unsolved murders of dozens of women should do. 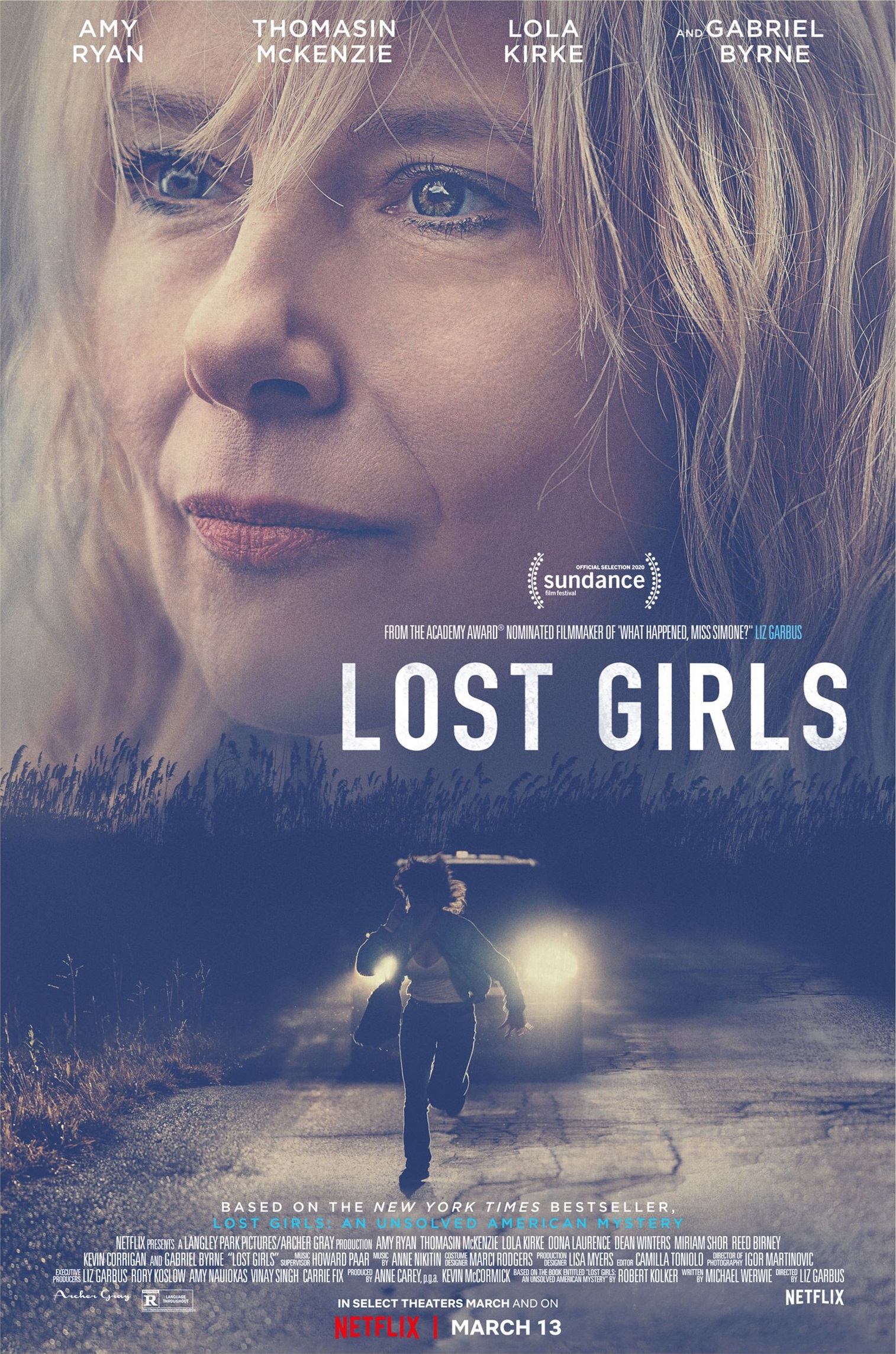 Synopsis: Based on true events, the movie focuses on Mari Gilbert’s struggle against  police incompetence to get to the bottom of her daughter Shannan’s disappearance. Although Mari’s efforts lead to the discovery of more than a dozen other murdered women, many of them employed as sex workers, she must continue to fight tooth and nail to spur the police into action to investigate the cases. Her crusade for justice will expose how the police department’s disturbing tendency to ignore the deaths of “high risk” women enabled a serial killer’s decades long murder spree, and how their unwillingness to be held accountable for their neglect victimized the women’s families twice over.

My take: Lost Girls is a unique entry in the true crime genre because it’s a film that chooses to focus on the victims, and the experiences of their families, rather than the still-unknown person (or people) who murdered them. In a genre that relishes portraying horrific violence against women, and reverently dissects the lives and motivations of the men that murdered them, it’s rare and exceptional to find a movie that spends far more running time on the vibrant, multi-dimensional lives of these women than on their killer. Also exceptional is the fact that Lost Girls is directed by a woman, the remarkable Liz Garbus, whose previous documentary work helps shape the film into a piece that doesn’t shy away from embracing the unsatisfying loose ends of real life.

Lost Girls doesn’t take the easy way out in telling the stories of the dozens of women who were murdered, discarded, and forgotten in Long Island. While the film could have sensationalized the deaths by attempting to reconstruct them, or focused on the “high-risk” lifestyles of the murdered women, it takes another route, taking the time to show the audience that these women aren’t just characters in a movie, but real people who were murdered in the prime of their lives. Such a perspective is a breath of fresh air and a much-needed tone adjustment for the true crime genre, which often treats murdered women as props in their own stories.

There’s a horrifying pattern in law enforcement to dismiss the murders of sex workers and other vulnerable populations, such as runaways and drug users, as “occupational hazards.” During the 1970s and 1980s, the LAPD were notorious for dismissing the murders of women of color, sex workers, and other vulnerable populations as “NHI,” or “no human involved.” A variation on this phrase even popped up in the HBO drama Succession, where the murders of female and migrant cruise ship employees are categorized as “NRPI,” or “No Real Person Involved,” which further shows that the idea that women of color, sex workers, and drug users are considered to be “disposable” in our society. It’s an appalling mindset, and yet it’s entrenched enough in American law enforcement to have enabled the decades-long murder sprees of serial killers like Gary Ridgeway (The Green River Killer), Lonnie Franklin (The Grim Sleeper), and now the still unidentified Long Island Serial Killer. As The Killing Season filmmaker Rachel Mills stated when talking about the murders, “These guys aren’t getting away with murder because they are such geniuses…they have identified the perfect victims.”

Just by redressing this systemic issue, Lost Girls is a cut above many other  based-on-a-true-story true crime dramas. A star making turn by Thomasin McKenzie, who plays Mari Gilbert’s middle daughter Sherre, and haunting visuals from cinematographer Igor Martinovic make the film compelling and memorable. Where the film stumbles, however, is its focus on Mari and her strained relationship with her daughters. The real life story of Mari, Sherre, and Sarra Gilbert is complicated, tragic, and incredibly disturbing, and Lost Girls does itself no favors by glossing over the realities of the situation in favor of making Mari a more “likeable” protagonist. The film ends confidently on an ambiguous note when it comes to the mystery of the murderer, but can’t seem to the do the same for the fate of its central characters. I especially took issue with the final title card, which in my opinion gravely mischaracterized a violent crime, thus doing a disservice to the victim, and undercutting the film’s moral stance against dismissing violent crime against women.

Final Consensus: All in all, these minor issues do not take away from the overall value of the film. It shines an essential light on institutional police neglect, and the horrific epidemic of violence against sex workers. If it ends up shedding more light on these cases, than that would be even better. But even if Lost Girls serves only as a way to humanize marginalized victims, it will have done enough.