Hello, everyone! I just finished reading Julia Spencer-Fleming’s To Darkness and To Death, which is the fourth book out of nine in the Clare Fergusson/Russ Van Alstyne mystery series. Without even reading the book, it’s already clear that there is too much going on. A mystery series centered around two main protagonists? Fine, I guess! But if each book in the series is as meandering, needlessly complex, and frustratingly ambiguous as TDATD, then count me out.

Synopsis:  When Millie van der Hoeven goes missing on the day that her family will sign over their estate to a huge conservation organization, it seems like a coincidence. Reverend Clare Fergusson joins the search team, and Chief of Police Russ Van Alstyne even comes in on his day off. But soon, a simple missing person’s case transforms into a nightmare of violence, with Fergusson and Van Alstyne struggling to put the pieces together before the nightmare overwhelms their small town.

My take: Reading this novel was like trying to juggle a bunch of chainsaws. There are more than 20 characters in this 300 page novel, a handful of different violent crimes needing to be solved, a random subplot about the church, some random British guy named Hugh, and the romantic affair plot-line between Clare Fergusson and Russ Van Alstyne. Oh, and did I mention this whole novel takes place in 24 hours between when the first character is discovered to be missing and the entire plot is resolved?

I’m gonna be spoiling this book, I’m sorry, so if you actually want to read it, then stop here.

The novel is set in the small town of Miller’s Kill in the New York Adirondacks. It’s called Miller’s Kill because “kill” is the Middle Dutch word for water, and because this is a murder mystery! But anyways, you would think that in a tiny town like Miller’s Kill where everyone is interrelated and not much happens, you wouldn’t have a day start with a disappearance and end with a resort exploding. But that’s exactly what happens in this book.

There is just too much going on. As I mentioned above, there is not one violent crime in this book, but several. Most murder mysteries center around one crime and solve it by the end of the novel. Throughout the course of this novel, one woman is kidnapped 3 separate times, one woman is beaten almost to death, one man is murdered, one man is stabbed, two men burn to death, and both a resort and a paper mill explode. Again, this all takes place in 24 hours in a tiny town!! If this was New York City or Chicago, I’d find this series of crimes believable, but in this little hamlet, I was rolling my eyes so hard they almost got stuck.

The frequency of violent crime in this idyllic town was not the only part of this novel that defied belief. It was the actual motive behind the crimes that made no sense. At the beginning of this novel, Spencer-Fleming introduces us to around 10 different characters, all with their own intricate backstories and family relationships. She paints them all as hard-working Christians (religion not implied) who want to do nothing more than support their families in these tough economic times (of 2005). And yet in the span of about 50 pages, these same characters become absolute villains. One character beats a woman and leaves her for dead because she tried to stop him from stealing her father’s logging equipment. Another character pushes a man off of a balcony and then kidnaps a woman in order to prevent his paper mill from being sold. Neither of these characters are portrayed as ruthless or violent until the moment they snap, quite the contrary in fact, with both being described in sympathetic terms. And afterwards, they’re still portrayed in an ambiguous light, with one of the men’s eyes described as “innocent” and even being allowed to apologize for his brutal attempted murder before he dies.

If Spencer-Fleming’s intention was to show that violent men are everywhere, and that murderers are often the people we trust the most, then that’s a valid point. But I think she has a problem giving any of her characters moral clarity. Now I’m not saying that every novel needs a good guy and a bad guy, but in a murder mystery, there has to be a protagonist to root for and a villain to root against. I didn’t find any of her characters worth rooting for.

Her two protagonists Clare Fergusson and Russ Van Alstyne might have been worth rooting for if they weren’t engaged in a clandestine emotional affair beneath the nose of Russ’s wonderful and supportive wife. Both characters try to explain it away as saying that they’re each other soulmates, but I don’t give a fuck. I refuse to root for two characters who are so selfish. Divorce your wife, Russ, if you don’t love her anymore, but don’t expect sympathy from the reader for your overwhelming desire to hook up with the hot priest who’s 15 years younger than you because she’s your “soulmate.” And Clare’s no better, as she’s still dating someone when she knows that she loves Russ. It made me so incredibly frustrated!

Yeah, I’m not being subtle here, but neither is Spencer-Fleming. There is very little in the way of justice in this book for everyone involved, least of all the victims. The men who victimized these women get twice as many pages devoted to their perspectives, while these women get almost nothing. The men in this novel are pretty much all stupid and violent, but the women are too. After reading this book, it might seem like Spencer-Fleming intended for everyone to be morally ambiguous, except for the fact that she seems to be supporting the idea that any man is justified in resorting to aggravated battery and murder if he’s put in a desperate enough position. Call me crazy, but losing one’s employment or business is not an excuse for murder. And the women supporting these men are equally to blame.

Besides the morally reprehensible cast of characters, there’s not much in this book that I would recommend. Spencer-Fleming has some nice prose, but the story itself, despite only being 300 places, is slow and meandering. She wastes too much time explaining the tedious backstories of random characters and not enough time convincing the reader why we should care at all about them, or about any character in this miserable book. Plus, despite being a “murder mystery,” there is hardly a mystery to be seen! I guessed the culprit to both “mysteries” almost immediately and was frustrated by how long it seemed to take the cops to catch up with me. Despite a lot of time spent describing the various members of the police force, there’s hardly any police work in this novel. No one really discovers anything. Both victims just tell the police who hurt them. Clare Fergusson’s main role in this novel is to conveniently be wherever plot things are happening, and Russ Van Alstyne’s role is to mope around because he can’t have sex with Clare, evade his wife, and misinterpret whatever evidence happens to fall in his lap.

Well, you get it. I’m not a fan of this book and have no interest in reading the rest of the series. But if you like novels inspired by Murphy’s Law, then you’ll be adding To Darkness and To Death to your reading list. 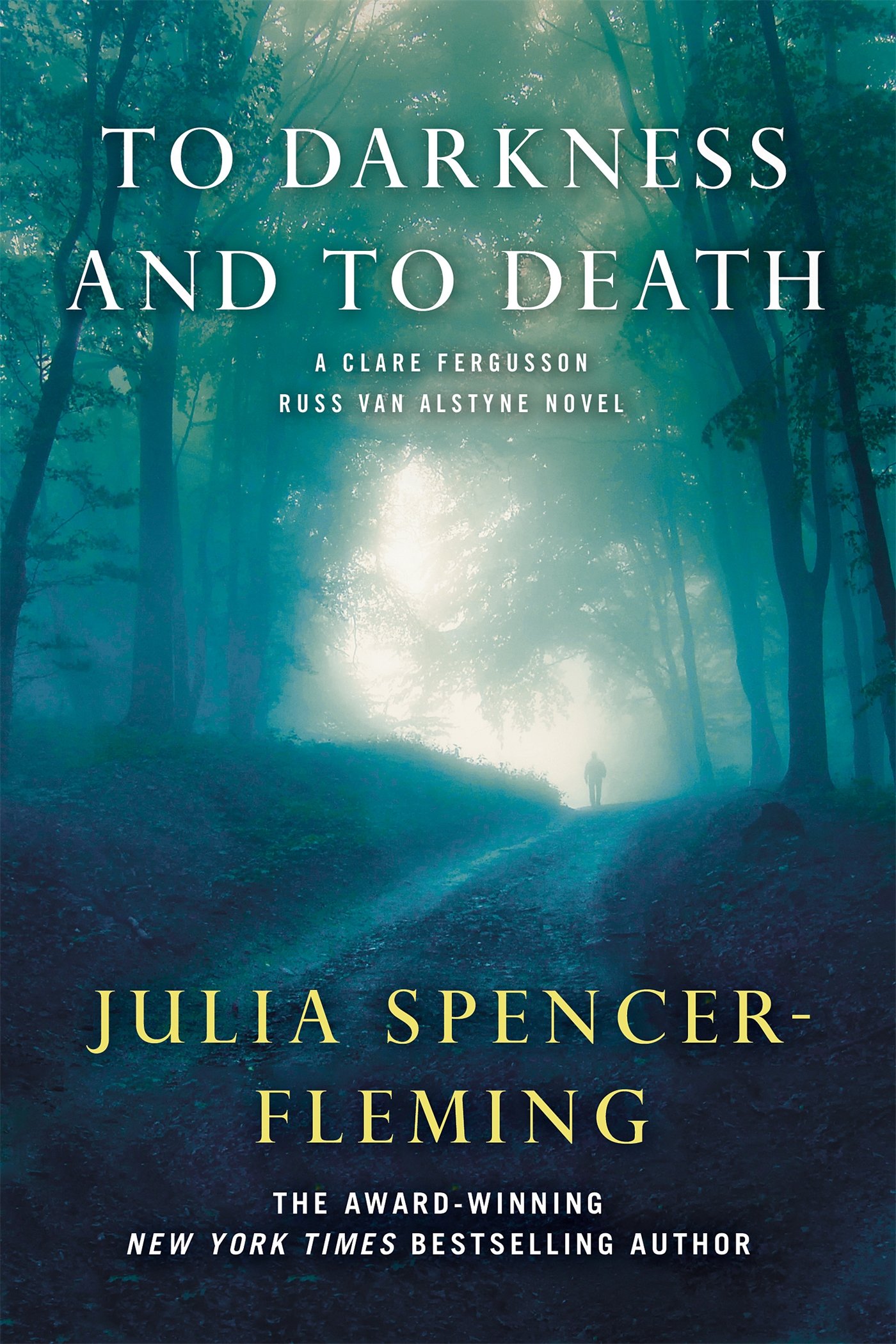