Hello, everyone! According to Disney’s handy countdown/doomsday clock, we are 39 days away from the launch of Disney+. And you know what that means, right? Another attack on the media goliath masquerading as America’s best friend. While I can’t stop Disney+ from launching, or prevent the inevitable destruction of independent media companies, I can write some blog posts telling them to go to hell. They might own 35% of the film industry, but they don’t own me.

For my third anti-Disney post, we’ll be discussing the behemoth that is Disney. What do they own? Why is does it matter? Perhaps Disney+ doesn’t seem too horrible of an idea, but when you look at it as more than a streaming service, and instead as another arm in the insidious, all-consuming octopus known as Disney, it becomes a lot more concerning.

What does Disney own?

Recently, Disney was in the spotlight for purchasing 21st Century Fox, a huge media company, that like its new parent company, already controlled a significant portion of the entertainment industry. Hailed by media’s own Genghis Khan, or as he’s formally known, Disney CEO Bob Iger, as an “extraordinary and historic moment,” the $71 billion dollar merger gives Disney control over everything in 21st Century Fox’s hefty media portfolio, including big hitters such as Twentieth Century Fox, Fox Searchlight, FX Networks, National Geographic, several large international media companies, and a controlling stake in Hulu.

A lot of people were incensed about this merger, including the government and Sony CEO Tim Rothman, who said it’s “very sad.” It’s more than “very sad,” however, considering that this astronomical acquisition is only one part of Disney’s gargantuan media portfolio. You see, for the past decade or so, while the American public has been worrying about the total takeover of companies like Facebook and Google, Disney has been quietly buying pretty much every cornerstone of the American entertainment industry and making it their own.

Here’s a handy infographic, courtesy of Cartoonbrew.com, to illustrate just how much Disney owns: 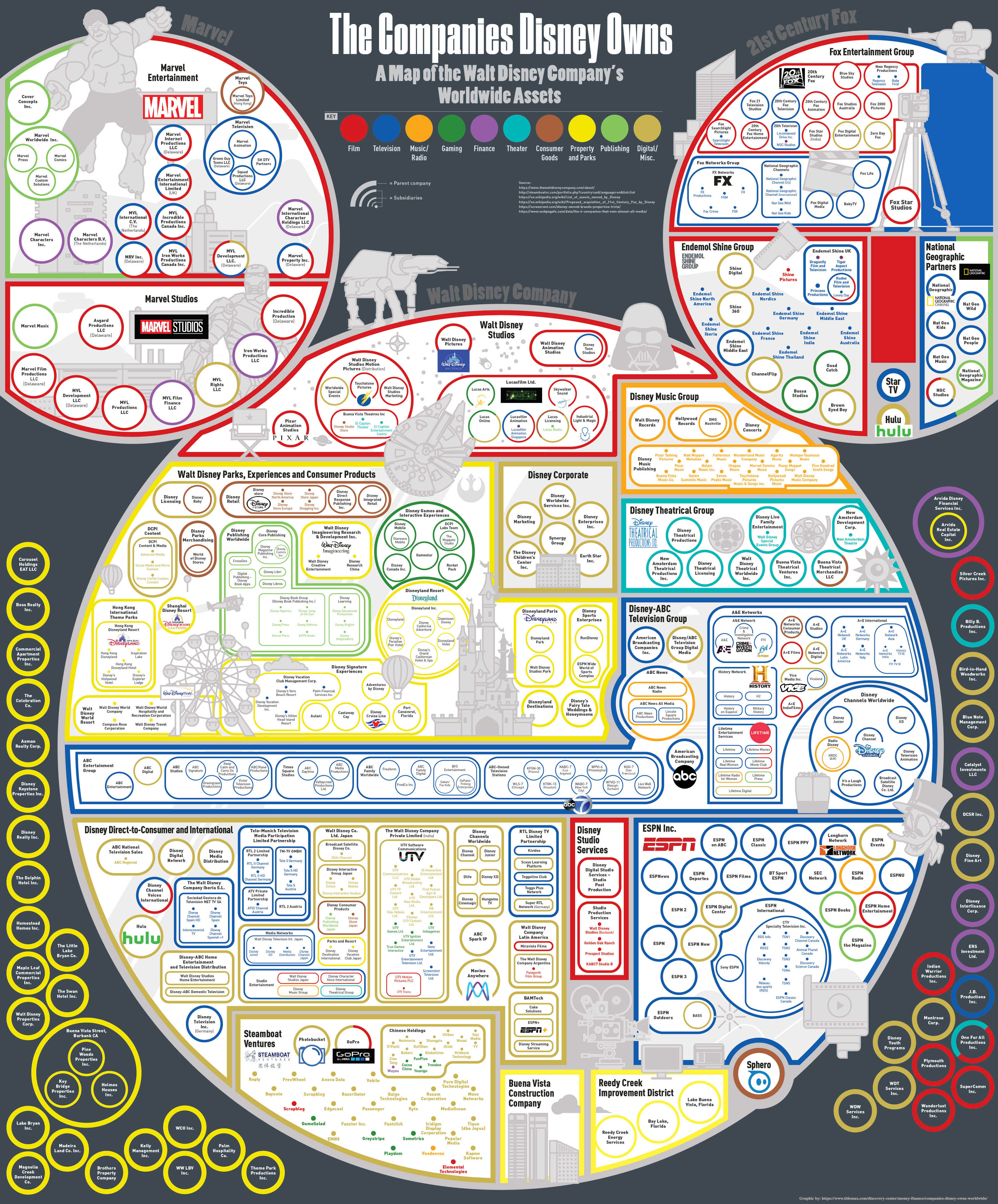 Frightening, right? Notable properties include Marvel, Lucasfilm, Pixar, Hulu, 21st Century Fox, ESPN, ABC and all its affiliates, A+E Networks, Lifetime Networks, Vice (which I thought was independent media?!), pretty much everything to do with Fox, National Geographic, or FX (which is a lot), GoPro (which is strange, but ok) and about a hundred tiny other companies.

If we put this in terms of the individual pieces of media that Disney now owns, you have quite an eclectic group of entertainment. For example, we know that Disney now owns the entire Star Wars universe and the entire Marvel universe, but did you know that Disney also owns all of Fox’s properties, including shows like American Horror Story, Fargo, and Pose, as well as films like Birdman, 12 Years a Slave, and Black Swan. When you compare these types of complex adult films to Disney’s usual repertoire, it seems not a little mis-matched.

Why does it matter?

As the executives at 21st Century Fox were quick to assure the public, Disney is invested in smoothing out conflicts between competing shows. Even though shows like Fox’s singing competition The Four might directly compete with Disney owned American Idol, or DC shows Lucifer and Gotham don’t mesh with Disney’s Marvel universe, Disney has supposedly promised their new baby that they “want a smooth transition” and aren’t interested in “sanitizing” any controversial brands like AHS.

Promises are nice, but this is Disney we’re talking about. After Disney bought Pixar, the company started producing two sequels for every one original movie, which is how we ended up with tripe like Incredibles 2 and Toy Story 4. After Disney bought Lucasfilm, we got films like Solo and The Last Jedi. After Disney bought Marvel, the company changed from a quirky studio for comic book nerds into a soul-less sequel factory, producing film after film that are completely identical. I know I am in the minority here with these opinions. I know that a lot of people, probably the majority in fact, like Incredibles 2 and The Last Jedi and the entire Marvel cinematic universe. Even if you enjoy those films, however, you have to acknowledge an indisputable fact. When Disney acquires a company, it strips it of its individuality. No matter how much it seems like it cares about good art or independent media, all Disney cares about is making a profit. This is evident in the evolution of every once independent property now owned by Disney.

So where does Disney+ fit into all of this? As we discussed above, Disney owns a lot of companies. This is great for their streaming service, but bad for pretty much every other streaming service, cable, and independent media in general. Disney+ promises to have everything Disney, which now means 21st Century Fox properties too. That’s a lot of media, and all for the low monthly price of $6.99. Now compare that to Disney’s top competitor Netflix, whose standard streaming plan is twice that, at $12.99 per month, and you start to see the problems. First, Netflix is pricier than Disney because Netflix makes less of a profit than Disney does. Netflix makes a yearly revenue of $4.2 billion, but only a profit of $134 million, because the company spends most of its money on acquiring and producing new content. Compare that to Disney, which made an almost unimaginable $59.4 billion in revenue in 2018, and you see how unfair this is. Not only does Disney already own an enormous amount of properties, but it is has almost  4 times Netflix’s yearly revenue in operating budget alone (15.7 billion) to acquire and produce new content. This isn’t David vs. Goliath, this is David versus an entire army of Goliaths. While Netflix CEO Reed Hastings seemed to brush this disparity off, saying that “any one provider entering only matters on the margin” of what Netflix provides, I think he’s avoiding the real problem here, namely that Disney is not merely one provider. It holds so many movies and television shows that it is essentially hundreds of companies and identities at once, providing a platform for a five-year-old obsessed with princesses to a 40-year-old history buff to a football fan and more. Netflix, too, attracts a wide array of viewers, but it cannot hope to catch up to what Disney already owns and is willing to spend money on creating. It’s an incredibly tragic and dispiriting thought, but Disney+ could potentially spell the end of Netflix, if it doesn’t end up buying it completely.

You might be wondering why it matters if Disney+ kills Netflix. What is one streaming service over another? The issue comes down to company identity and the value placed by each company on originality and independent ideology. The difference between Disney and Netflix is that Disney is an incredibly identity-heavy brand, while Netflix is a streaming platform that is grounded in the creation of original content from a variety of individual creators. Everything made by Disney exists within Disney ideology. That’s why Marvel movies, Star Wars films, and Pixar sequels have all started to seem so indistinguishable: they have taken on the Disney identity.

Disney wants to make as much profit as possible, which means appealing to as many people as possible, which means that minority tastes become irrelevant. Netflix, on the other hand, thrives on minority tastes. Do you think that Disney would produce  shows like Sense8, Bojack Horseman, or Big Mouth? Disney may claim that that they’re interested in producing the same type of adult content as Fox and FX, but we’ll see how long that lasts. FX’s chief John Landgraf even said in a Vanity Fair article that “Disney has been a very good steward of brands that it has bought” and that companies like “Pixar and Marvel have distinctive cultures” but to me, that sounds like this:

They are their own identifiable brands, but they do not have distinctive cultures. They have been completely Disney-fied, transformed from brands into products that can be marketed en masse to international audiences. Films have transformed into sequels, which have transformed into “universes,” which is just another way of saying “endless stream of merchandising revenue.” Whatever revenue Netflix makes on merchandise is negligible compared to Disney, which is just another difference between the two companies. Merchandise and branding are at the heart of Disney, while original content is at the heart of Netflix’s.

Only time will tell what happens to Netflix once Disney+ launches, but I have a feeling it won’t be good. Until then, we can all do our part, no matter how small. Don’t buy Disney+. You’re just adding more fuel to the fire. Stay tuned for part 4 of my Disney Sucks series, in which I’ll go in-depth on Disney ideology and how it’s furthering the homogenization of American media. Stay strong, folks, and watch Netflix while you can. Only God knows how much longer it will be here.