Hello, everyone! I want to share some of the fantastic books that I’ve been reading this month. I’m working on a project that involves fairy tales for school, but the books I found are pretty awesome and not like any fairy tales I’ve read before. Enjoy!

The book is a collection of short fairy tales, all modern twists on classic fairy tales. So far, I’ve read a story in which Baba Yaga has a fateful meeting with John James Audobon, a story about the day in the life of half of Rumplestiltskin, and another story about the Russian snow queen. Each story is a gem. I found myself looking for signs of the classics in each twisted adaptation. Modern fairy tales can be hit and miss because they can include all the elements of the story but lose the message behind the original tales. Each of these stories, however, seem to be written by authors who really understand the significance of fairy tales. And as for that title, well, that’s definitely a conversation starter.

Carter’s collection of short stories are lush and captivating. “The Bloody Chamber,” a modernish take on Blue Beard, keeps the mystery of the original story intact but adds a surprising twist. I’ve just started the second story and I’m looking forward to reading the third in the collection, “The Erlking,” which inspired an homage in the Kate Bernheim collection. Carter is somewhat of a fairy tale legend who’s won numerous literary prizes. Her style is beautifully descriptive and to me, old-fashioned, but in a comforting way. If you’re a fan of fairy tales that lean toward the dark and twisted, I would recommend this book. 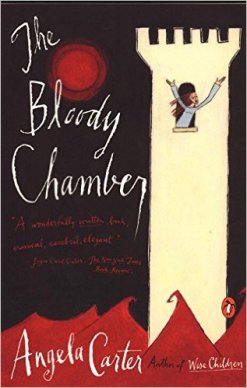 I’ve been really trying to get into this book, but I just can’t. It was recommended to me by a friend who loves, loves, loves it, but we have very different taste in literature. The novel is similar to Pale Fire in that it’s kind of a book inside of a book, except House of Leaves takes that concepts to an intense, confusing level by being a book about a non-fiction work about a documentary that doesn’t exist. It’s very interactive, and the full-color version, which I’m borrowing, has a whole appendix with letters, maps, secret codes, etc. I’m a fan of this type of meta-narrative, but I don’t like Danielewski’s style; it reminds me of Dave Eggers. A pro if you like Dave Eggers, but a definite con if you don’t. Hopefully I’ll get around to finishing the book (if only because I’ll feel guilty if I don’t). If you want to read a book that’s like none you’ve ever experienced, I’d suggest House of Leaves, but settle in, because it’s quite immersive.

I’ve watched many Sherlock adaptations (Benedict Cumberbatch will always be my favorite) but this is my first chance at reading Doyle’s original stories. I didn’t realize that he was so funny. I’m in the middle of “The Red-Headed League” but I’ve been so distracted by schoolwork that I haven’t learned why exactly red heads have a league. Sadly, this is another book I’ve borrowed from a friend, so the clock is ticking! I’ll make a cup of cocoa and read these by the fire.

The real reason I haven’t read Sherlock is not because of schoolwork (though that helps) but because I was occupied in re-reading The Help for the fifth time. I find Stockett’s prose very comforting and even though the story itself is a tear-jerker (but less so the fifth time), it’s also an easy, breezy read that lets my brain relax before bed. Unlike House of Leaves which…oh my god… I can’t deal with it. It’s like homework. Anyways, the movie sucks but the book is great and I’ll add it to my rotation of yearly re-reads.

LOL just looked at the books I said that I was going to read in September…I read none of them. I’m a failure. Books everywhere laugh at me. The joke’s on you, books. I’ll read you…someday.