Hello, all! I haven’t had any time to watch horror movies lately (to my greatest despair), but luckily I remembered that I hadn’t yet written about the last horror movie I did watch, which is Brad Anderson’s chilling asylum horror Session 9. Warning: if you have a fear of chairs, stop reading now.

Synopsis: Gordon (Peter Mullan), the boss of a five man asbestos crew, accepts a contract to rid the old Danvers State (Mental) Hospital of asbestos in only one week. Though the rest of his crew think that the job will be impossible, Gordon pressures them to accept it. The crew is a rag-tag team with a tense relationship. Gordon’s right-hand man, Phil, lost his girlfriend to Hank, a cow-boy type who often brags to Phil about his conquest. Another team-member, Mike, was born into a wealthier family than the rest but is a college drop-out. The last team-member is Jeff, Gordon’s nephew, who is deeply afraid of the dark and is the butt of many jokes regarding his intelligence.

The team starts the job amicably enough, but slowly the atmosphere of the asylum frays their spirit. Phil mercilessly rags on Jeff and fights with Hank. Left alone, Mike discovers a box of tapes describing nine therapy sessions of a woman named Mary, who has a split-personality disorder. Through each tape, he discovers more and more about her personalities, especially the ominous Simon.

Gordon is haunted by troubles with his wife and baby. As tensions grow and the group is plagued by mysterious violence, Gordon must grapple with the present events and his past deeds while trying to fend off the hold of the asylum’s malevolent spirit.

Best aspects of the film

Location: The Danvers State Hospital, where the movie was actually filmed, made the perfect creepy canvas for Anderson’s psychological horror. Asylum cliches, like disturbing graffiti, recorded therapy sessions, and underground tunnels were well-used (especially the voice recordings) and even re-worked in surprising ways. The brightly lit grounds, in some hands a respite from the darkness, are used by Anderson as a venue for some of the darkest scenes in the film. He lets no part of the asylum go to waste. 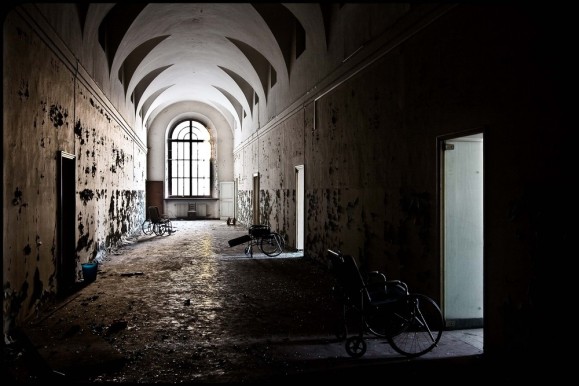 Sound Design and Soundtrack: From the instant the movie starts, the viewer is bombarded with sound. Not screechy Alfred Hitchcock violins, but dribs and drabs of unidentifiable scratches, squeaks, broken records, and aborted sentences that get under your skin and remain there for the whole film. It’s an assault of the ears that immediately inspires a sense of unease in the viewer; a sense of “is that coming from the movie, or from inside my house?” The original score is similarly simplistic, with only a sequence of repeating chords, but mixed with the eerie sound design, it’s quite uncomfortable to listen to.

This soundtrack, as well as The House of the Devil original score, are my two favorite examples of great horror movie music. Take a listen:

Quality Scares: I can’t remember exactly how many jump scares there were, but they were negated by two or three frightening scenes that really made the movie. The “climax” of the movie has one of the best usages of suspenseful cutting I’ve ever seen.  Without spoiling anything, I can say that Anderson turned a simple phobia, the fear of darkness, into a nightmare. The development of the Mary/Simon plot provides top-notch auditory scares, as well as amping up the disturbing atmosphere. Anderson is the emodiment of restraint; the scariest scenes were long, dark, and charged with a growing sense that something terrifying was just around the corner. The obsession with The Chair was a recurring motif, though we never found out what it was for (that didn’t stop it from being creepy). And though the movie is mostly action-less, it’s never boring.

Worst aspects of the film

Footage Quality and Dialogue: I’m not sure what happened when making the film, but half the footage is of visibly better quality than the other half. Half is professional, the other half is amateur to the point of being a student film. The dialogue suffers in the same way, with some parts of the scripts keeping the viewer’s attention and the other parts failing under laborious word choice and trite conversations. I can forgive Anderson for this because it was his first horror film, and I think he spent most of his budget on the location. He went on to make The Machinist, which has some similar psychological aspects, but is more disturbing (in my opinion) and Stonehearst Asylum, which I haven’t seen yet but is on Netflix.

Plot Twist: I won’t tell you the plot twist, but it’s not a real head-scratcher. All I’ll say is that it is very, very similar to The Machinist, so if you’ve see one you know what to expect from the other. I wish Anderson’s plot could be as ambitious as his scares, but it was only his first horror movie and I’m sure he has more great things to come. There was one strange bit of the film that particularly bothered me: Gordon’s Scottish accent. It was never explained and not even mentioned. His nephew and his wife both had American accents. I can’t tell why Anderson went with this decision because it was too peculiar to be an accident.

Session 9  has an uninspired plot twist, but it wins in all other areas. I’d heard a lot of hype about this film before I watched it, so I was prepared to be disappointed (not because I’m a pessimist, that’s just a reality with hyped horror movies), but it fulfilled all my expectations. I don’ t think I’ll ever watch this movie again, but I mean that in the best way possible. It delivers an under-the-skin discomfort that I’d rather not experience again.

2 thoughts on “Even the Chairs Are Scary in Session 9”