Hello, all! This post brought to you by Michael Nyman and his supposedly “simple”  piano music. Why did you throw in 3/8 meter when 4/4 was doing just fine?

Today I watched Madame Bovary, and despite the middling Rotten Tomato reviews, I was quite impressed. I’ve never read Gustave Flaubert’s book, so I can’t compare it to the text, but I understand from the reviews that it diverges from the plot in some significant ways. That being said, I’m going to review this movie as if Flaubert’s book had never been written, therefore reducing the chances of me sounding like an uncultured swine. I get it, Flaubert’s novel is a masterpiece and the movie didn’t do it justice, but sometimes we must forget our expectations and enjoy movies for what they are: visual mediums. Stream of consciousness and fluctuating point-of-views work for novels, but they don’t work very well for movies.

The movie’s plot goes like this: Emma, a middle class, convent-educated girl, is married to Charles Bovary, a country doctor. They live in a stately manor in Yonville, a fictional town near Rouen, France. Charles is kind to Emma and loves her, but doesn’t understand her complex womanly feelings, so she decides to take matters into her own hands by doing whatever the fuck she wants. She takes lovers (two to be exact), spends buckets of moolah on clothing and furniture, and tries to run away from Charles multiple times. Naturally, these doings spiral out of control because nothing is secret in rural 19th century France and Emma dies tragically, leaving her loving and bewildered husband to search for her remains.

The director Sophie Barthe made a very streamlined version of Madame Bovary, but since I’m not talking about the novel I’ll pretend like this movie accurately represented the story. There were some pacing issues in the film, mostly in the beginning, which rapidly skipped over any explanation of Emma and Charles’ courtship. We’re thrown immediately into Emma’s life, which is undeniably beautiful, but as a viewer we don’t understand her actions. The first 10 minutes are chock full of domestic scenes: Emma baking delicate cookies that Charles rejects as too fancy, Emma having disinterested sex with Charles, Emma hearing Charles discuss gross skin ailments with his patients. She spends much of her time staring sadly at the window. From a viewer’s perspective, I had trouble understanding why Emma was so unhappy. Charles is a kind man, if a bit unattentive, and Emma lives comfortably in a nice town. She has books, a piano, a garden, a village full of people to make friends with, yet she is discontent. Since we don’t have the novel’s characterization to explain Emma’s behavior, she explains to the viewer her life outlook. She sees life in Yonville as a long, undending corridor. Nothing will satisfy her except excitement and passion, both which Charles cannot provide for her. Again, we infer a lot of this from Emma’s forlorn glances out the window and when she throws shade at Charles for daring to be happy with his provincial life.

Mia Wasikowska did an admirable job at bringing complexity into what could seem like a shallow character. It’s easy to call Emma spoiled and delusional, especially because we aren’t told about her formative childhood in the movie, but Wasikowska made Emma seem like a realistic woman whose life never took the right path. While I might want Emma to be grateful for what she has, I couldn’t fault her for wishing for something more. Wasikowska plays Emma like a woman with too much of everything; too much beauty, too much love, and too many expectations. When she pours her heart out to her lover and is rejected, I felt terrible for her, because I know that she can’t help who she is. When she begs Mr. L’Heureux to reduce her shopping debts, I felt pity for her, even though all of her debts were of her own making. She’s an impulsive and selfish character, but she is who she is, and while Mia Wasikoswka could have disdained her, instead she made her into a vulnerable and brave character.

Wasikowska is one of those actresses with a truly unique face. She looks like a living Titian painting. I thought she was excellent in Jane Eyre and I think she peformed equally well in Madame Bovary too. And damn does she look good in 19th century riding habits. The costume designers Valerie Ranchoux and Christian Gasc deserve Oscars or a Costume Designer Guild Award because these were some of the most show stopping outfits I’ve ever seen. Seriously, that orange dress could make the Hunchback of Notre Dame look hawt.

Aesthetic beauty is the main achievement of Sophie Barthe’s Madam Bovary. Whether Emma is running through the woods or merely sitting alone in her drawing room, the lighting and set convey a perfectly melancholy mood. Barthe bathes the scenes in sumptuous purples, oranges, blues and yellows. Even when Barthe could let the natural beauty of the woods shine, she plays with light and color to enhance every image to its fullest potential. It reminded of the way that Hannibal is shot, where color and costume often play a bigger part in setting the tone of a scene than the dialogue. I don’t mind that in a movie, but I can understand where others might have the emphasis on appearance over content to be unappealing. The music was also wonderful. I had never heard of the compose Evgueni Galperine before, but I’d listen to his scores anytime. He’s mainly composed music for French movies, so this is the first American movie for which he’s gained prominence. I thought his piece Rouen was stellar. The trills reminded a bit of Danny Elfman’s Black Beauty theme.

Sophie Barthe made some peculiar directing decisions in this film. For instance, there is no clear accent shared between characters. Though the film takes place in France, Charles Bovary speaks with a posh British accent, Leon Depuis, one of Emma’s lovers, speaks like a 21st century American teenager, Paul Giamatti sounds like Paul Giamatti, and Emma has an American accent. The inconsistency is really strange. The casting also had me questioning a few things. I thought Charles (Henry Lloyd-Hughes) was well cast, but the rest of the men in the movie threw me for a loop. Leon, for instance, is played by Ezra Miller, who is the least French person you could cast, and seems completely like a man of our time. He’s not a bad actor at all (he was terrifying in We Need To Talk About Kevin), but I don’t buy Emma falling head over heels for him. Even though they are a few years apart in age, Emma seemed so much more mature than him, like a matron having an affair with a school boy. His face is also out of place in a period piece. It’s too striking and exotic to blend in with the other, cookie-cutter castmates. He’s a very handsome actor, but in this movie his singular features hinder instead of help him.

Paul Giamatti’s role was confusing and unneeded. His character, Monsieur Homais, featured heavily in the novel, but since his storyline was cut from the film, he played no real role in Barthe’s Madam Bovary. A well chosen cast member was Rhys Ifans, who  was convincingly sinsister as L’Heureux, the man who introduces Emma to the insidious world of credit card debt.  Madame Bovary:  was the original Confessions of a Shopaholic. Unfortunately, Emma’s story doesn’t end with a couture flea market and a marriage proposal from the dashing Hugh Dancy. Though now that I think about it, he would have been an excellent Leon. Oooh, I can imagine the costuming now!

Barthe’s use of color symbolism was another interesting directorial choice. Instead of explaining too much through dialogue, Emma’s changing emotional state was reflected through her outfits. Emma also regarded her clothing as a manifestation of the person she wanted to be, so as her inner self changed, her outer persona transformed too. She wears a golden dress with purple vines when she dies, and she wears the same dress earlier in the movie when she has a very foreshadowing convulsing fit. She wears a shockingly bright orange at the hunt where she meets her first lover, and a red dress when they first begin their affair. Her clothes demonstrate her inward passion, her sadness, and her desperation. The vivid purple dress she wears on the cover reminded me of a poisonous flower, as if she’s displaying her inner toxicity in her clothing choices. 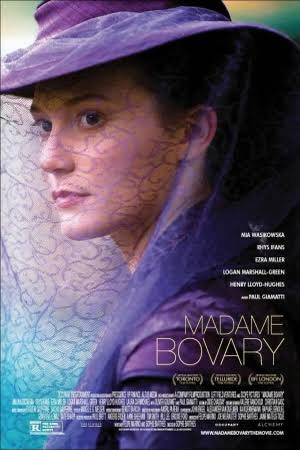 The sex scenes were few in this movie, but they were significant. Barthe approached them differently than I think a male director would have. Instead of focusing on the sex between Emma and  the Marquis, who symbolizes power and masculinity, she focused on the after parts, the tender kisses and glances. Whereas when Emma sleeps with Leon, who is more effeminate and emotional than the Marquis, Barthe showed the actual sex, as if she was demonstrating that Emma’s true sexual awakening was realized through emotional connection, not physical prowess. Another small, but peculiar detail: when male directors show post-sexual encounters, they always cover the woman’s breasts with a sheet or a blanket. But when female directors like Barthe  show the same sort of scenes, the woman’s breasts are out and uncovered. I don’t know why this is, but I feel like it stems from an embarrassment of showing woman’s breasts, like they’re strange beasts only to be uncovered for the mating ritual. I don’t think it matters either way; it’s simply a stylistic choice made by the director, but I don’t see any harm in…god forbid…a nipple being shown on TV. It’s like show the entire boob but not the nipple, NOT THE NIPPLE!

Many of the viewers said that this movie was merely “watchable,” but I’ll go as far as to say that it was downright enjoyable. I was invested in Emma’s story and dreading her downfall. Plus, the movie was gorgeously made from start to finish and that’s more than can be said for many blockbusters being shown today. I would watch it again, but it would have to be included in a dramatic 19th century heroine marathon including Jane Eyre and Far From The Madding Crowd. This movie was far better than Far From The Madding Crowd. Emma 5ever–Bathsheba can go rot in hell. If you don’t know what I’m referring to, go watch the new Far From the Madding Crowd with Carey Mulligan. They’re both fiercely independent women, except Emma doesn’t suck. Digression aside, I thought this movie was well-executed and deserved a far better adjective than “watchable.” Modern Family is “watchable,” but Madame Bovary is so much more.

2 thoughts on “Review of Madame Bovary: All I want is everything!”